You can get it at the PsyMP3 project page, always at http://code.google.com/p/psymp3/.

Kudos to Agamemnus of Freenode’s ##freebasic for making the icon

Posted by Unknown at 4:51 PM No comments:

Today, I was given a new mp3 player made by a company right here in Florida, called Augen. This device is called the Eclipse, and it is rather much a simple, cheap ho-hum Chinese-build player with Chinese-coded firmware.

This is an cheap Chinese knock-off of the iPod Nano with a video camera, circa 2009.

The first thing I did when I first got the Eclipse is tried out it’s FM radio. After a few minutes figuring out the controls, I managed to get it to work. The control set is rather annoying, and leave a lot to be desired, and can be at times be difficult to use.

As for the FM radio, it’s piss-poor. I was only able to pick up 4 stations which I could understand the sound being broadcast, and only one station out of all those being broadcast in my area was even coming in clear as day. I get better reception with a cheap 50¢ micro FM radio.

The device does support displaying text files stored in it’s memory, but the feature is an utter joke. It does not understand newlines, nor does it know how to intelligently wrap text. Also, the text display is a monospaced, bitmap font that is very similar to the classic Courier font. Worse yet, it only has a text display that is 15 characters wide. If you are imagining this in your head, this must look rather hideous. 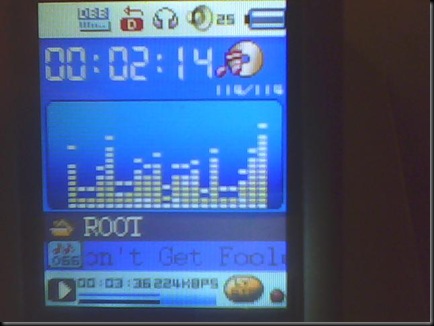 A close-up of the screen, giving you an idea of how the interface looks. That spectrum analyzer display is fake as fuck.

The Eclipse has the capability of playing back your common audio formats, such as Windows WAVE format, ISO/MPEG Layer-III Audio (commonly known as MP3) and Windows Media Audio.

But what’s this? Look closer at this icon.

No, you’re not misreading that, that plainly does say “OGG”. In the cheapest and utter shittiest of mp3 players, the Augen Eclipse boasts support for the patent-free Ogg Vorbis format.

For video, this device supports the wholly shitty AMV video format. AMV is a cheap and overly simple audio/video format, designed to be decoded by firmware for S1 MP3 players, which are powered by an 8-bit Zilog Z80-compatible processor.

AMV is basically 12 or 16 FPS Motion JPEG video with a fixed quantitizer and a crappy IMA ADPCM variant for audio.

Well, that it. If you want to find more information on this device, I can’t help you. The company that makes this thing doesn’t even have an email address.

Email ThisBlogThis!Share to TwitterShare to FacebookShare to Pinterest
Labels: reviews

It’s time again for PETA’s “State Of The Union Undress”! That’s right, our female narrator will strip down to nothing, leaving both the hoo-hoo and the ta-tas exposed bare for all to see, all in the name of animal rights!

Check out the video at http://www.peta.org/feat/stateoftheunion10/

And the embedded version below:

I have always been a nomad, going from window manager to window manager, across systems and networks, from the classics, such as twm, fvwm, mwm, to more modern and contemporary WMs such as Enlightenment, KWin, Metacity, IceWM, Fluxbox, BlackBox, Openbox, AfterStep, Ion (and Ion 2 and Ion 3), etc., and I have not found a WM that works quite like what I want without all the extras that I didn’t.

I know this Belgian guy names Mattis that wrote a window manager named matwm. Originally, it was a fork of evilwm/yeahwm, but that didn’t last. Only one release was ever made, matwm-0.0.1. Enter matwm2. A from-scratch, brand new window manger that is EWMH-compatible and ICCCM-compatible.

For several months now, Mattis has been working hard now, refining matwm2 to a wonderful state. Only recently has he declared a 0.1, after almost 100 0.0.x releases, and even the 0.1 prereleases feel like a stable 1.0 release!

UPDATE! Screw what I said about prereleases, 0.1.0 stable has been cut out, and you can get the code from http://www.squidjam.com/matwm/.

It is known to work on the following OSes, and should work on far earlier releases than tested:

Microsoft Windows Subsystem for Unix-based Application version 5.2, 6.0, and later. Should work on earlier Interix 3.5. Unsure about 3.0 and earlier.

Since I took too much of your time with useless details above, here’s a video of a fat boy running into a fence and knocking it down: